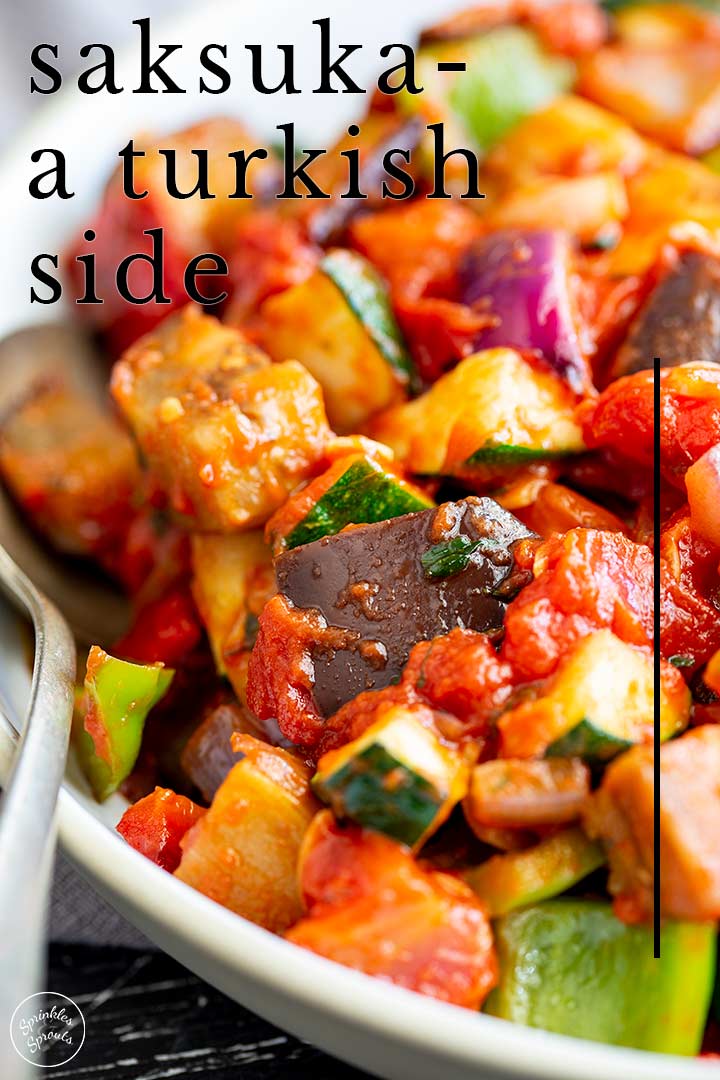 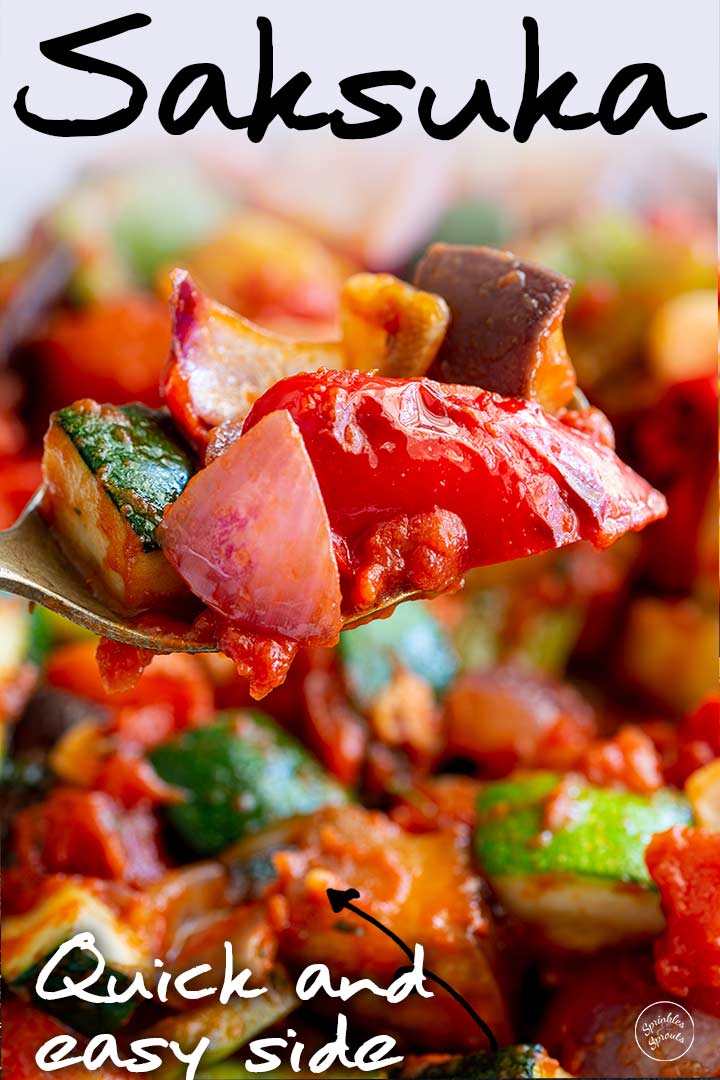 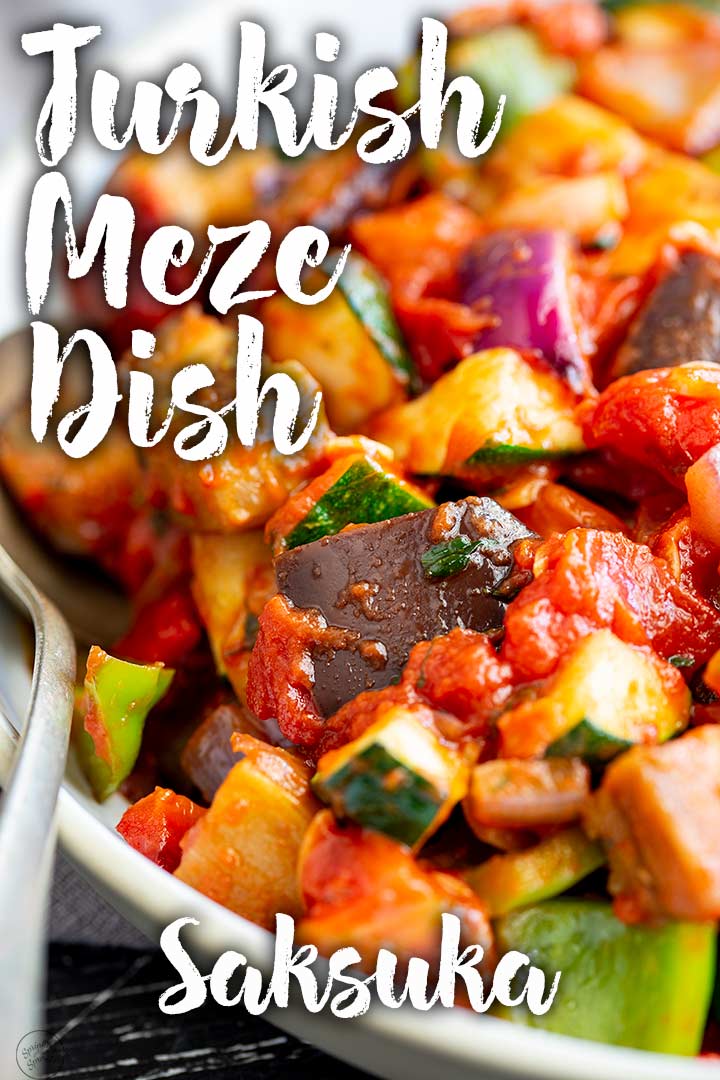 Şakşuka is a traditional Turkish dish with sauteed vegetables in a thick garlicky tomato sauce.

Saksuka can be served hot or cold, making it a great versatile side dish or a prepare ahead part of a meze or buffet. And this rich vegetable ragout recipe is so easy to make at home!

The vegetables added can vary region to region, but eggplants, zucchini, onion, and peppers are the most common. You can make this spicy by using a hot pepper or keep it mild with just bell peppers.

It is a dish of fried eggplants and zucchinis and green peppers in a thick garlic tomato sauce.

It is often served as part of a meze or as a Turkish side dish.

This used to be something our grandmothers did to remove the bitter taste of eggplant/aubergine.

BUT these days, the bitter taste of the eggplant has been bred out of them. Now we only salt an eggplant if we are worried about the water content.

The water content will stop the eggplant crisping up or can ruin a recipe, like moussaka, by making the finished dish too wet.

To salt eggplant, cut it up into chunks (or whatever your recipe calls for) and place it in a colander over the sink. Sprinkle over salt (I use kosher salt/table salt) and leave it for up to an hour.

You want to use about ½ tablespoon per pound (450g) of eggplant. I find that a tablespoon of salt is enough for an average-sized eggplant.

Once the eggplant has been salted, it needs to be rinsed well (to remove the salt) and then patted dry with paper towel, or a clean tea-towel.

Feel free to add any vegetables you have to this recipe, every region of Turkey adds their own spin to it, so add yours too.

Other vegetables that will work well include:

Ensure they are all cooked before you add them to the tomato sauce.

The food in Turkey is so diverse! It is always fresh and full of flavor, there are plenty of vegetables, and nothing has to be served piping hot! That makes it great for families as dishes can be prepared in advance and kept at room temperature.

Saksuka can be served as an appetizer, side dish or as part of a meze.

As an appetizer or starter

You could serve it with some lavash bread or Turkish bread as a starter or a dip, so good! Especially when served with cold yogurt spiced with fresh garlic.

As a side dish

Serve this eggplant ragout with some Orzo Pilaf and Marinated Turkish Chicken as part of a hot dinner.

As part of a Meze

We love to eat meze style, lots of plates of delicious goodies where everyone can serve themselves a little of what they like! And this Turkish eggplant recipe is perfect for that!

Check out these other ideas perfect for your meze:

Pin this recipe for Turkish Saksuka.
Pin it here. 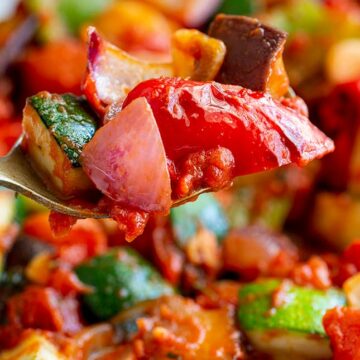 Şakşuka is a traditional Turkish dish that can be served as part of a meze or as a side dish. It is full of sauteed vegetables, including eggplant, zucchini, and bell peppers in a thick garlicky tomato sauce. This rich vegetable ragout recipe is so easy to make at home! With whatever vegetables you have on hand. A great one for meal prep as it tastes amazing at room temperature!
Prep Time10 mins
Cook Time15 mins
Salting15 mins
Total Time40 mins
Course: Appetizer, Side
Cuisine: Turkish
Servings: 4
Calories: 267kcal
Author: Claire | Sprinkle and Sprouts
For more great recipes follow me on PinterestFollow @sprinklessprout
Need Metric Measurements?Use the options below to toggle between cups and grams (if relevant)
Prevent your screen from going dark