JUMP TO RECIPE
JUMP TO VIDEO 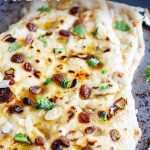 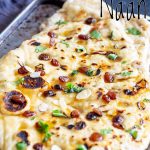 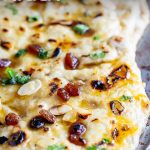 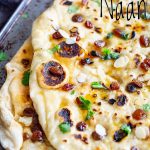 This Homemade Peshwari Naan recipe is simple to make and easy to cook. It makes the perfect side for any Indian curry.

The sweet filling is a mixture of sultanas, almonds, coconut, and butter. This makes the naan a delicious sweet Indian bread great with an extra spicy curry!

The bread is fluffy and soft; it is a simple yeast dough that is easy to work with and cooks in a skillet or frying pan in under 5 minutes! And don’t worry about making a yeast dough, I promise with this recipe it is a doddle!

What is Peshwari Naan?

Peshwari Naan (or Peshawari naan) is a yeast-leavened bread, filled with desiccated coconut, sultanas (or raisins), and almonds. It originates from the city of Peshawar in Pakistan.

This sweet naan bread is usually brushed with melted butter or ghee once cooked. Some Indian restaurants will also add flaked almonds and sultanas to the top of the naan and drizzle it with honey or syrup.

It is a sweet bread that is served with Indian curries. We love Peshwari naan with spicy curries, as the sweetness balances the spice!

Making the dough for these naan breads is super simple, especially if you have a stand mixer! The yeast and water are added to the stand mixer first, then the flour, salt, sugar, and oil. After this, the mixer does the work!

Not all cup measures are created equal! I have found that my four different cup sets, give me a different amount of flour! And then, depending on how you fill your cup, the quantity of flour will vary quite significantly as well!

If I lightly fill my cups and then level them off, I need 2 cups of flour for this recipe. If I pack the cups, I need just 1 1/2 cups!!

To ensure the dough isn’t too wet or too stiff, start by adding 1 1/2 cups of flour and mixing it, if you find the dough is too wet, add up to 1/2 cup more flour.

If you have scales in the house, then this is the perfect time to use them. By weight, you need 10.5oz/300g of flour.

How to cook Naan at home

Cooking naan at home isn’t hard, and you don’t need any special equipment.

Naan is traditionally baked on the walls of a clay oven called a tandoori. This quick hot cooking is what gives it the beautiful soft fluffy texture and distinctive bubbles and char.

Not many of us have a clay tandoori oven in the garden – although wouldn’t that be amazing! But you can recreate the effect by using a superheated dry skillet, smooth griddle, or large frying pan.

The pan needs to be very hot, so it cooks the naan quickly. This is what puffs it up and keeps it soft. Naan that is cooked slowly will be crunch and hard.

You need a dry skillet (meaning no oil) so that the naan bakes rather than fries.

I like to use a large flat smooth iron griddle pan. It means I can make my naan into the tear shape that many restaurants serve. But the shape doesn’t matter, if you have a round frying pan, then just make the naan round.

How to make Peshwari naan filling

The filling is a sort of paste made up of desiccated coconut, sultanas, and almonds. These are pureed together in a food processor with butter, a little water, and extra sugar/honey.

This rough paste is then used inside the naan.

To do this I roll a rectangle of the dough out and spread 3 tablespoons of the mixture over one half. The dough is then folded over and rolled out into the naan shape. This encases the filling easily.

Don’t worry if some of your filling starts to poke through.

Curry and a naan makes so much sense! Having a soft fluffy naan bread to soak up all the delicious curry sauce is perfect!

It is common to pull a strip of Indian bread (naan, roti or paratha) and use it to scoop up some meat and sauce, then eat this all as one bite. If you have rice, scoop a little rice first, then finish with the meat and sauce.

Some great curries to try with this naan include:

If you love this Peshwari Naan why not try my Garlic Naan Bread.

Pin this recipe for Peshwari Naan.
Pin it here. 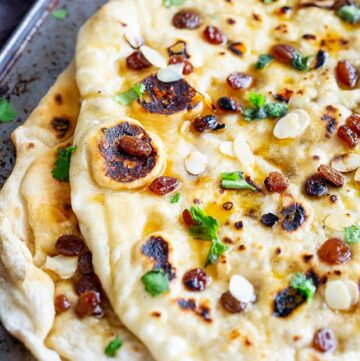 This Homemade Peshwari Naan recipe is simple to make and easy to cook. It makes the perfect side for any Indian curry. The sweet filling is a mixture of sultanas, almonds, coconut, and butter. This makes this naan a delicious sweet Indian bread great with an extra spicy curry! The bread is fluffy and soft and cooks in a skillet or frying pan in under 5 minutes!
Prep Time30 mins
Cook Time5 mins
Total Time35 mins
Course: Side
Cuisine: Indian
Servings: 6
Calories: 350kcal
Author: Claire | Sprinkles and Sprouts
For more great recipes follow me on PinterestFollow @sprinklessprout
Need Metric Measurements?Use the options below to toggle between cups and grams (if relevant)

For the naan breads

To make the dough (BY HAND METHOD)

To make the filling

To make the topping

To form and cook the naan

I believe cooking for those you love should be stress free and simple.

Here on Sprinkles and Sprouts you will find delicious meals all made with easy to find grocery store ingredients. Family friendly mains, sensational sides and delicious desserts. Plus a great selection of party food and appetizers.

All content, recipes and photographs are copyrighted to Claire McEwen and are the property of Sprinkles and Sprouts.
THEY MAY NOT BE REPUBLISHED IN PART OR WHOLE WITHOUT PERMISSION AND PROPER CREDIT.
Contact me to see republishing and syndication rights.