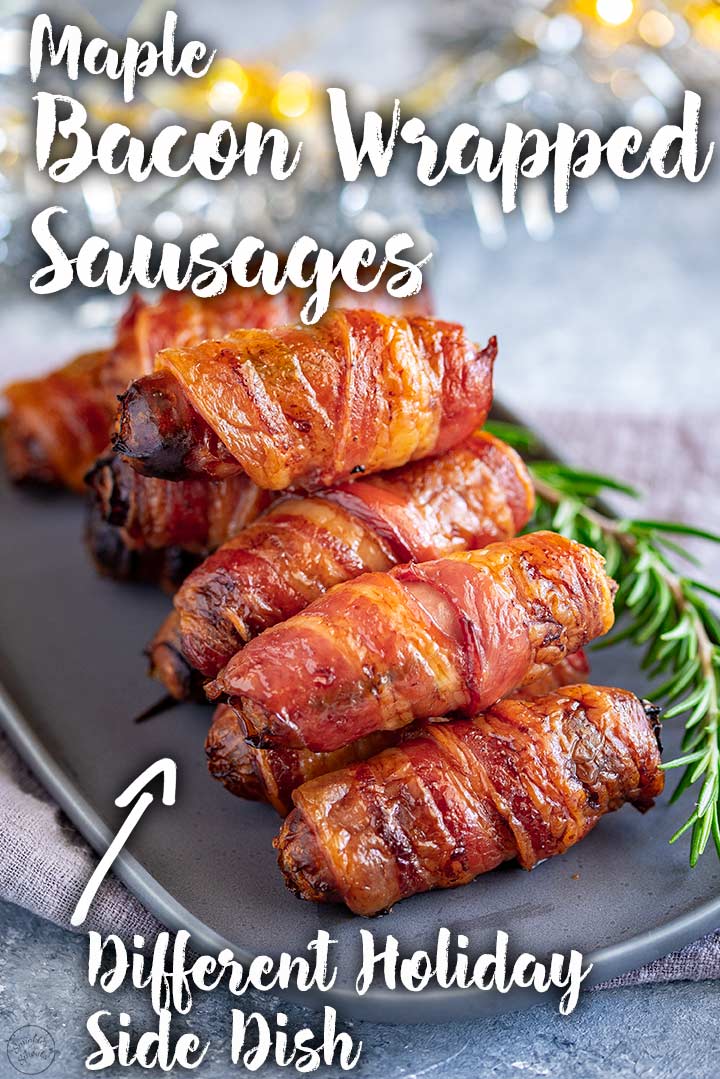 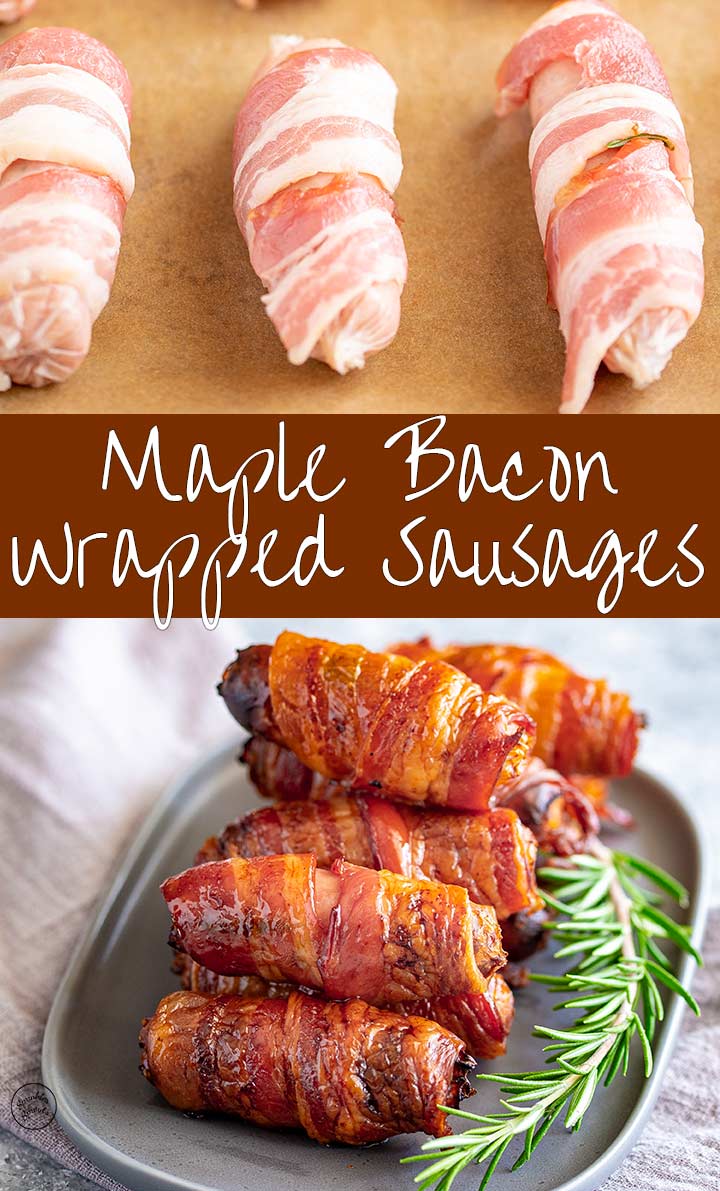 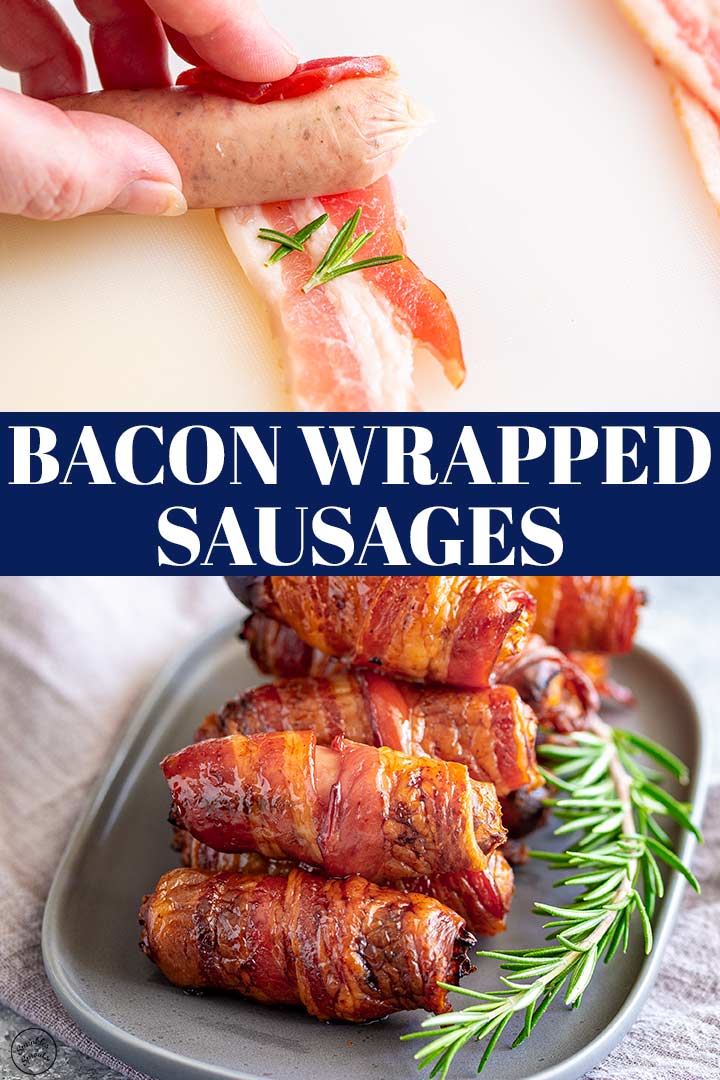 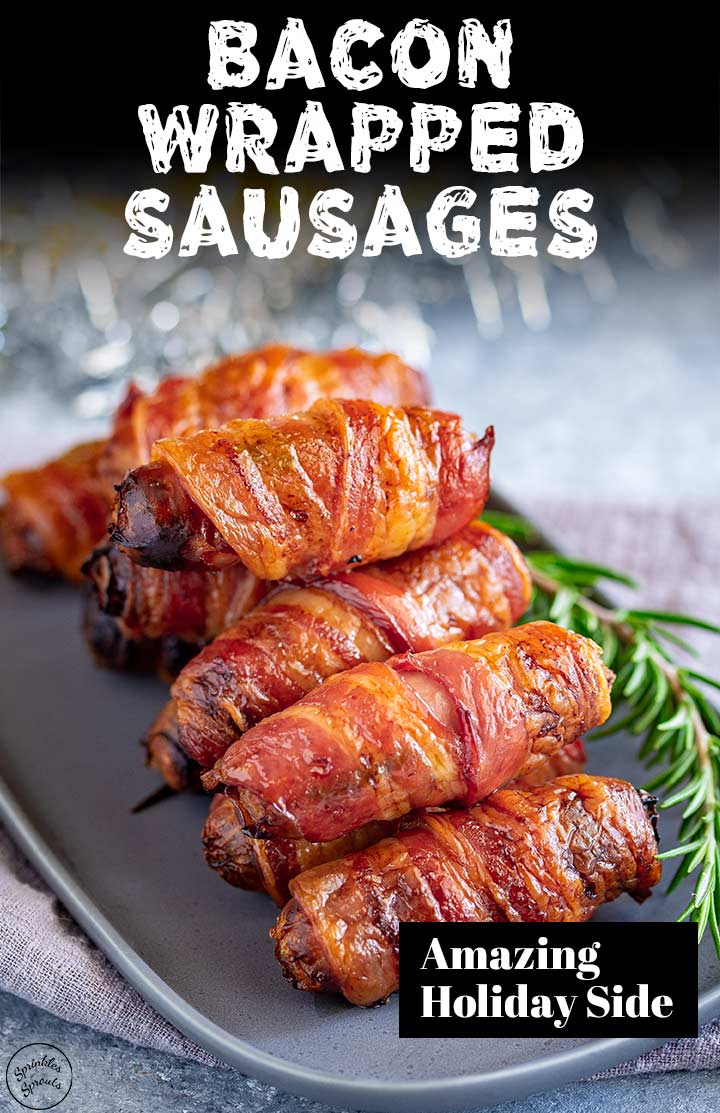 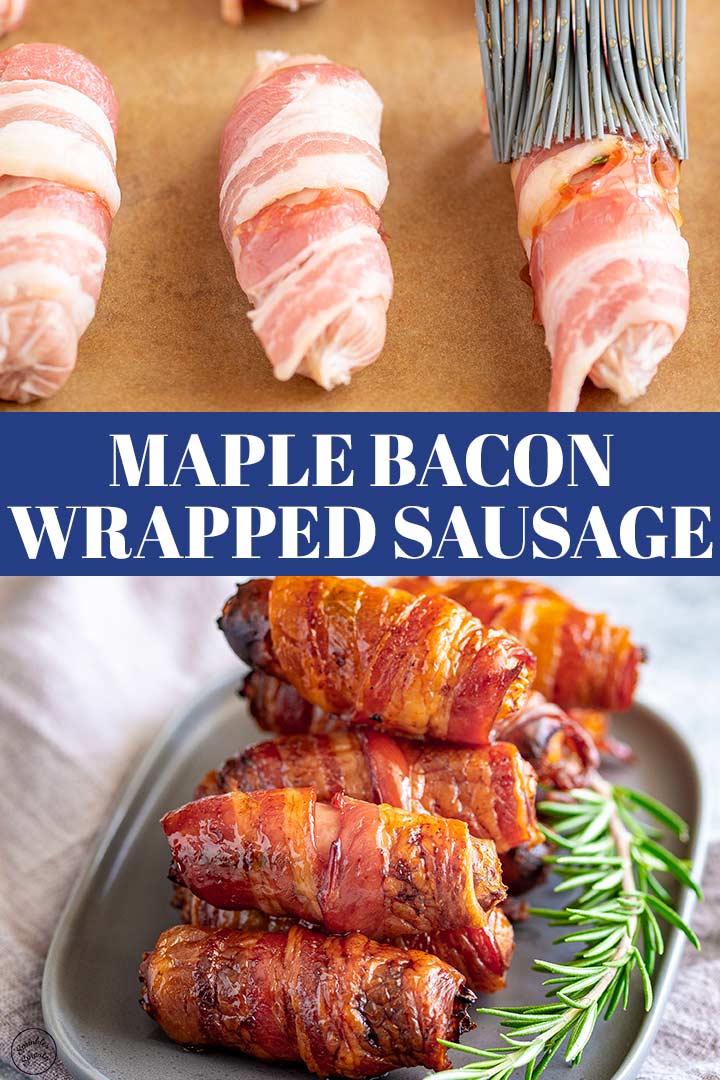 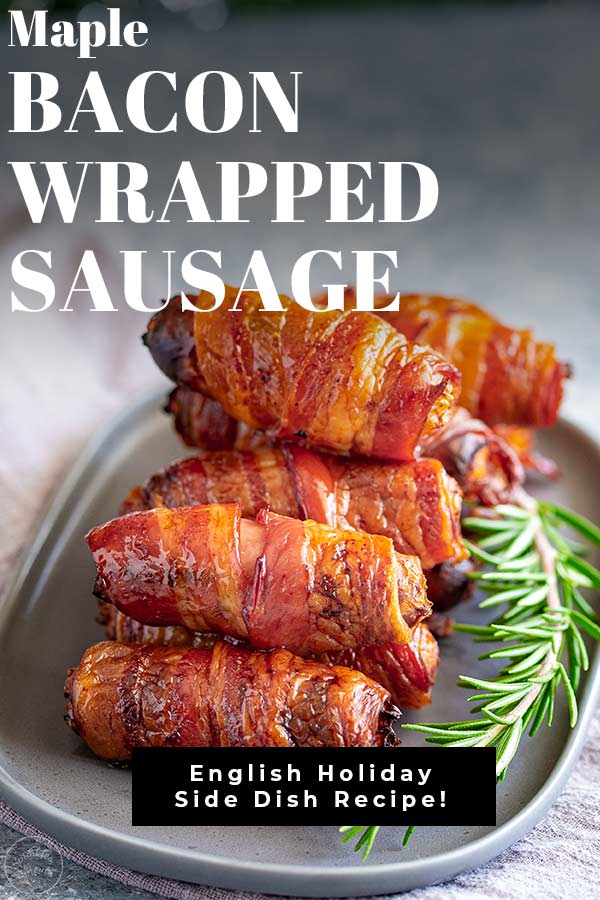 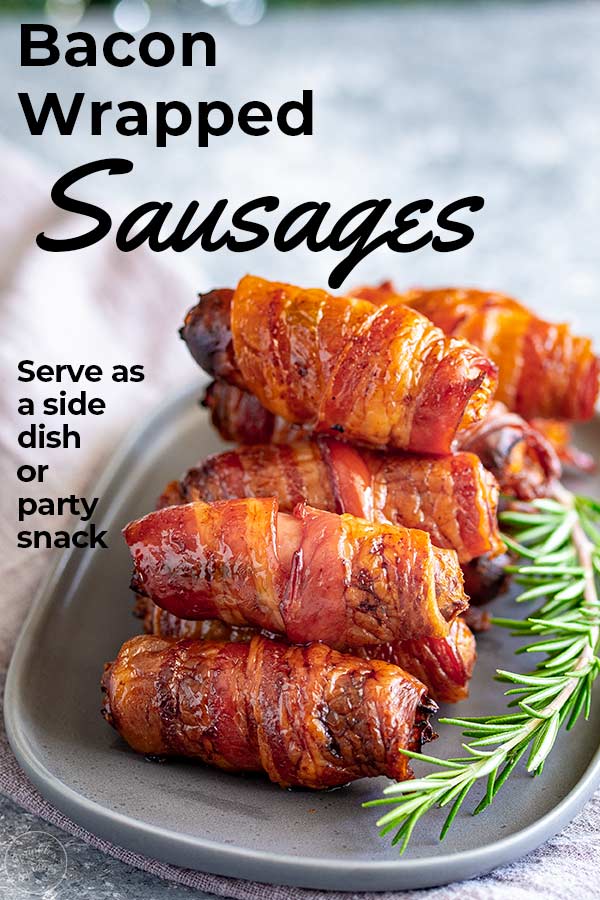 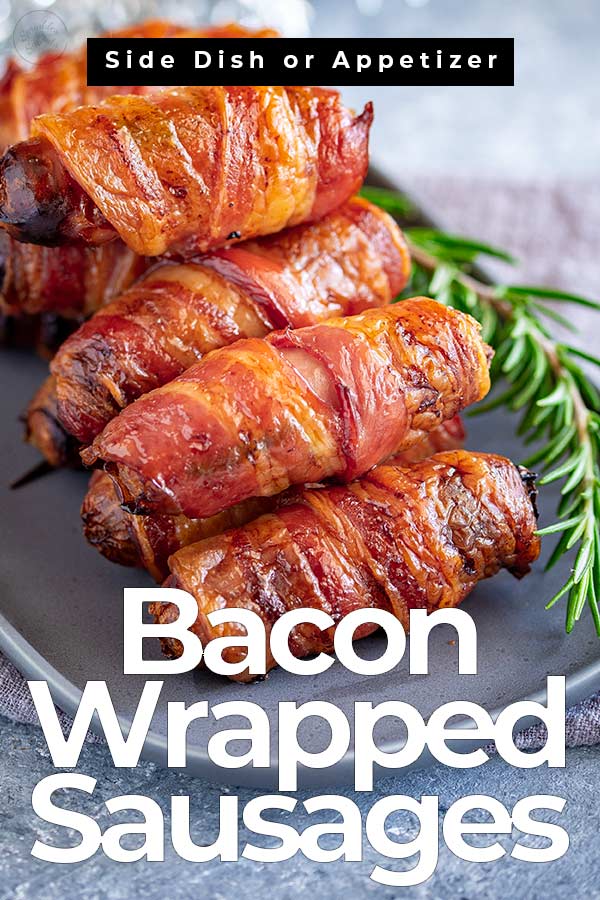 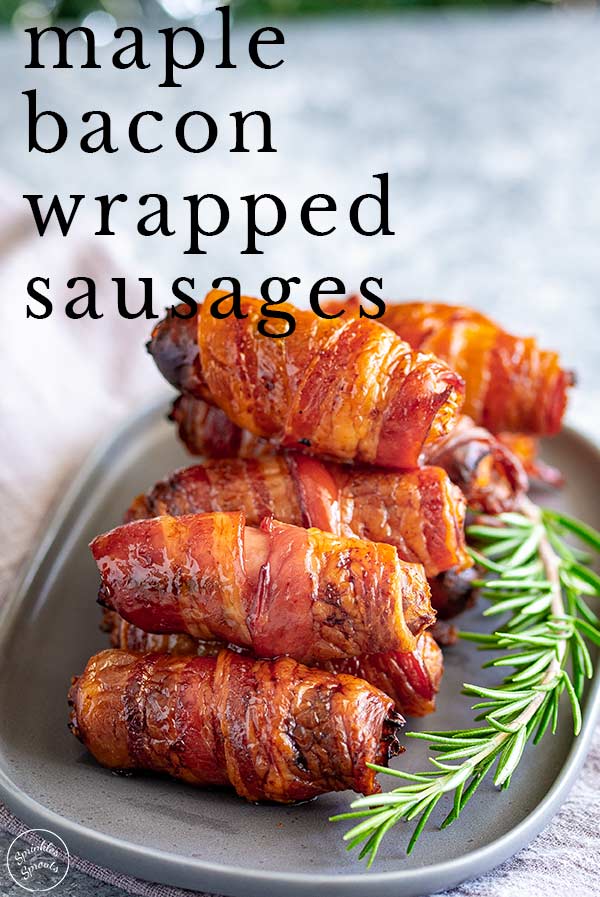 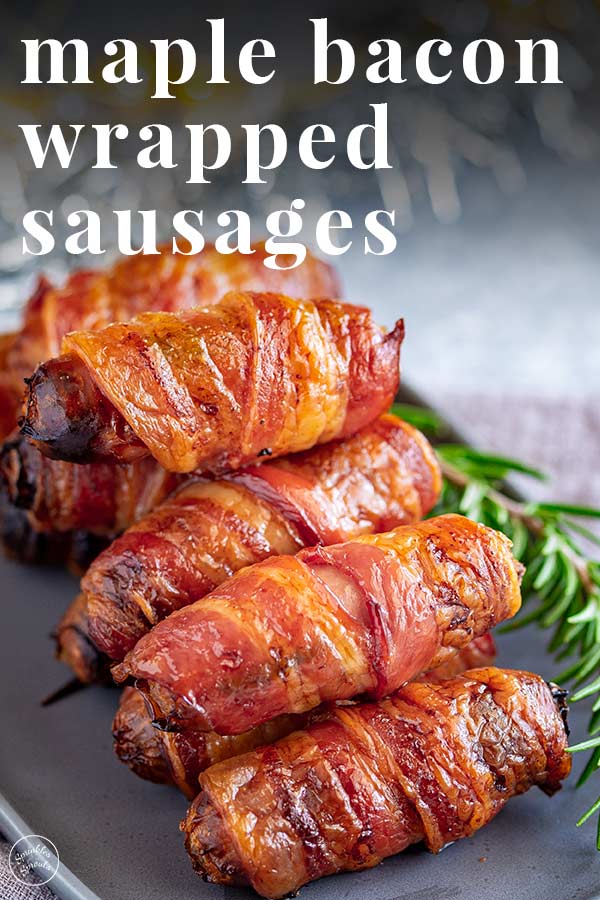 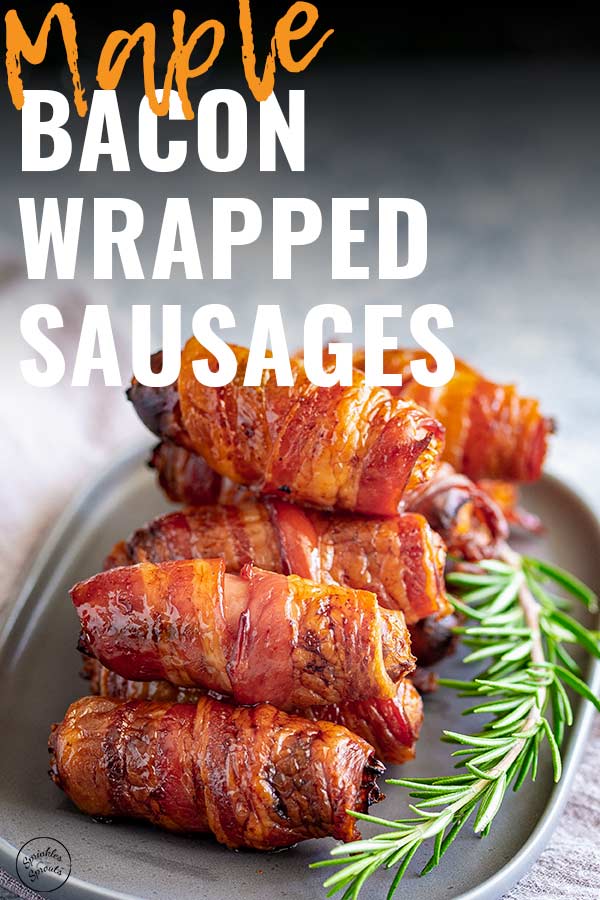 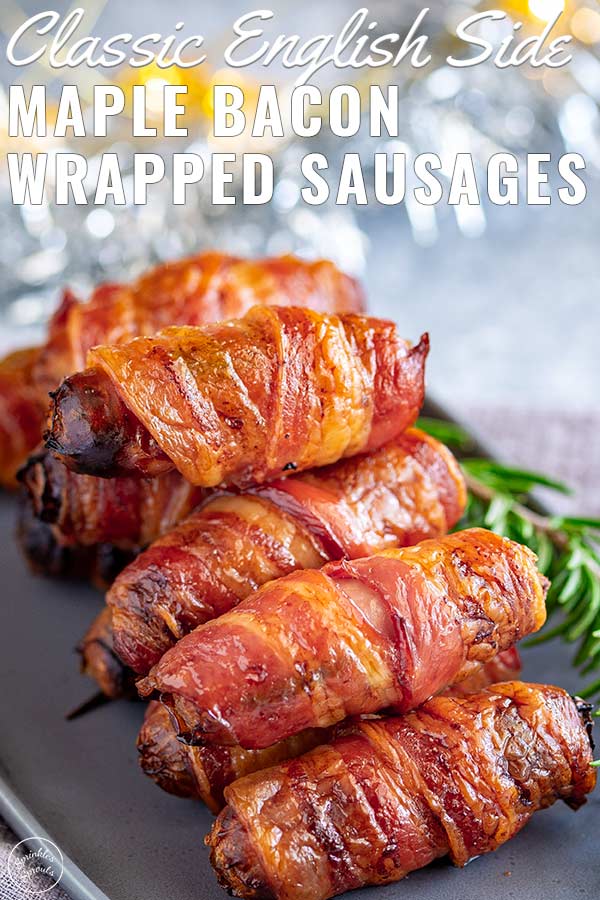 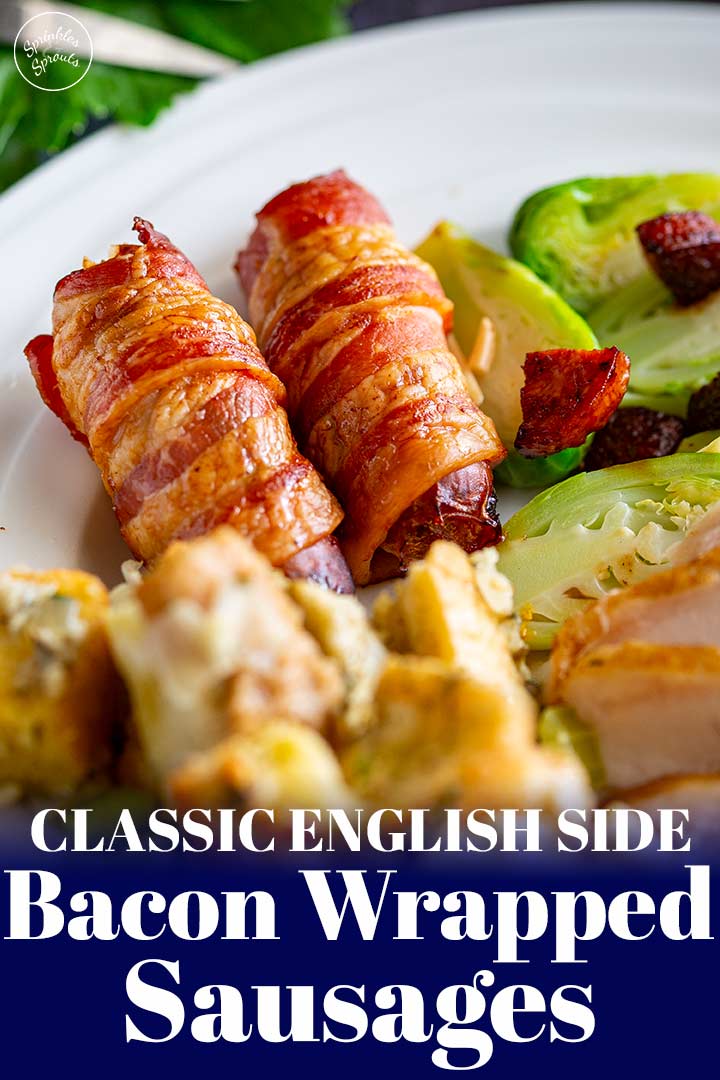 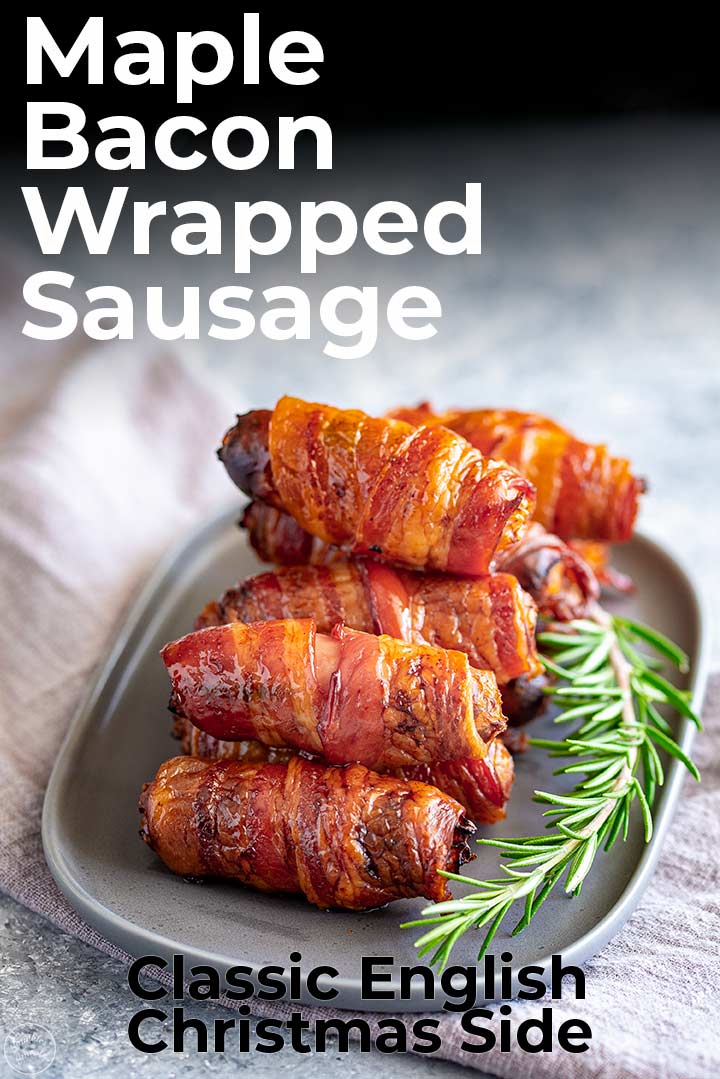 Sausages Wrapped in Bacon is a classic English Christmas side dish! Pork sausages wrapped in bacon and roasted until the bacon is crispy.

While it is traditional to serve these with the Christmas turkey, they also make a great party appetizer or a fun way to serve sausage and bacon at a brunch or breakfast.

The sausages and bacon in this recipe get a flavor a boost with a drizzle of maple syrup and fresh rosemary. Easy to make and loved by all, this is one recipe you'll make time and time again!

An Appetizer, a Snack, a Side, a Breakfast!!!

Wow wee, these babies can play a lot of roles in the upcoming holidays! They are always a favorite, so I like to make sure they appear as often as possible! I mean, who doesn't love sausages and bacon!!!

Like I said in the little blurb at the top, these are a classic English side dish that gets served with the Christmas turkey. It makes sense! Pork and bacon are ingredients that add flavor to things like stuffing, so why not skip adding them to the stuffing and serve them as a delicious stand-alone dish?!!

Stacked up on a plate with a dipping sauce (honey maple is a fav in this house!), they are perfect as a meaty hot party nibble/appetizer. I have a great appetizer coming next week that incorporates these sausages wrapped in bacon!

Or prep them in advance and cook them up for brunch or breakfast, they are a fun alertnative and can be easily cooked in the oven, making them great for feeding a crowd!

Plus, they are something you can easily make up if you find you need to take a snack to a party or have something for unexpected friends. The ingredients are all worth having in the fridge or pantry ready.

You want to buy the thin pork breakfast links (or chipolata) for this recipe. Make sure you purchase raw sausages rather than just brown and serve ones. Otherwise, you will find the sausages overcook before the bacon crisps up.

Then it is just an assembly job! Take a strip of bacon, place the sausage, and a couple of rosemary leaves on the end of the bacon and roll the bacon around the sausage.

The thinner bacon works well here as it wraps more easily. Once wrapped, trim any extra bacon off and secure the ends with a wooden toothpick or cocktail stick then place on a tray. Repeat as many times as needed!

You can scale this recipe so easily! So you can make just eight sausages wrapped in bacon or thirty! To quickly scale my recipes, just change the number of servings in the recipe card - there is a handy box with scaler arrows in it - and the ingredient quantities will change for you.

How much bacon to use

The recipe works on one slice of bacon per sausage, but once you have wrapped one sausage, you will have an idea of how much you need. The length of bacon varies with the brand, so you might find that your strips are longer/shorter.

Depending on the size of your bacon strips, you might get two sausages out of every strip of bacon. My bacon is quite short, and I find I get one sausage wrapped up with a little bacon leftover. I trim that off and keep it in a container in the refrigerator.

The leftover pieces of bacon are great for adding to soups and pasta recipes like this Garlic Bacon Pasta or this Creamy Scallop and Bacon Pasta. Or save them and cook them with eggs for bite-sized bacon treats 😉

A quick note on bacon, pick smoked bacon, it adds so much more flavor!

The sausages can be wrapped in bacon, secured with a toothpick or cocktail stick and then just stored in the fridge until needed. So you can get this side dish prepped on Christmas eve! Or the morning before your party!

Don't glaze them until you want to cook them though.

To cook these sausages wrapped in bacon, place them on a lined sheet pan and glaze them generously with maple syrup. You won't need any oil or fat as the sausages and bacon will release enough during cooking.

Once glazed, bake them in a 350ºF/170ºC oven for 25-30 minutes until the bacon is crispy. If you think about it, halfway through the cooking time, give the bacon wrapped sausages a quick baste with any drippings that have collected in the pan. This isn't a vital step, though!

Once cooked, remove the cocktail stick and allow to cool slightly, if serving as a party snack. Or place them around your turkey for a side dish that everyone will love!

Pin this recipe for Maple Sausages Wrapped in Bacon. Pin it here. 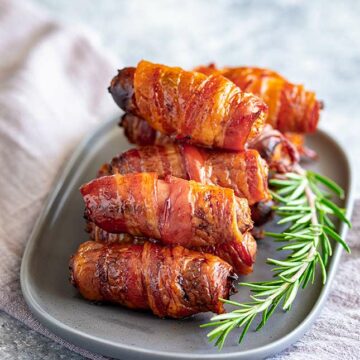 These Bacon Wrapped Sausages are traditionally served in England as a side dish to the Christmas turkey, but they also make a delicious party snack, appetizer, or a fun breakfast or brunch item. Pork sausages are wrapped in bacon, drizzled with maple syrup and then roasted until the bacon is crisp and the sausages are cooked. Easy to make and loved by all this is one recipe you'll make time and time again!
Prep Time15 mins
Cook Time25 mins
Total Time40 mins
Course: Appetizer, Breakfast, Party Food, Side
Cuisine: English
Servings: 8
Calories: 445kcal
Author: Claire | Sprinkle and Sprouts
For more great recipes follow me on PinterestFollow @sprinklessprout
Need Metric Measurements?Use the options below to toggle between cups and grams (if relevant)
Prevent your screen from going dark