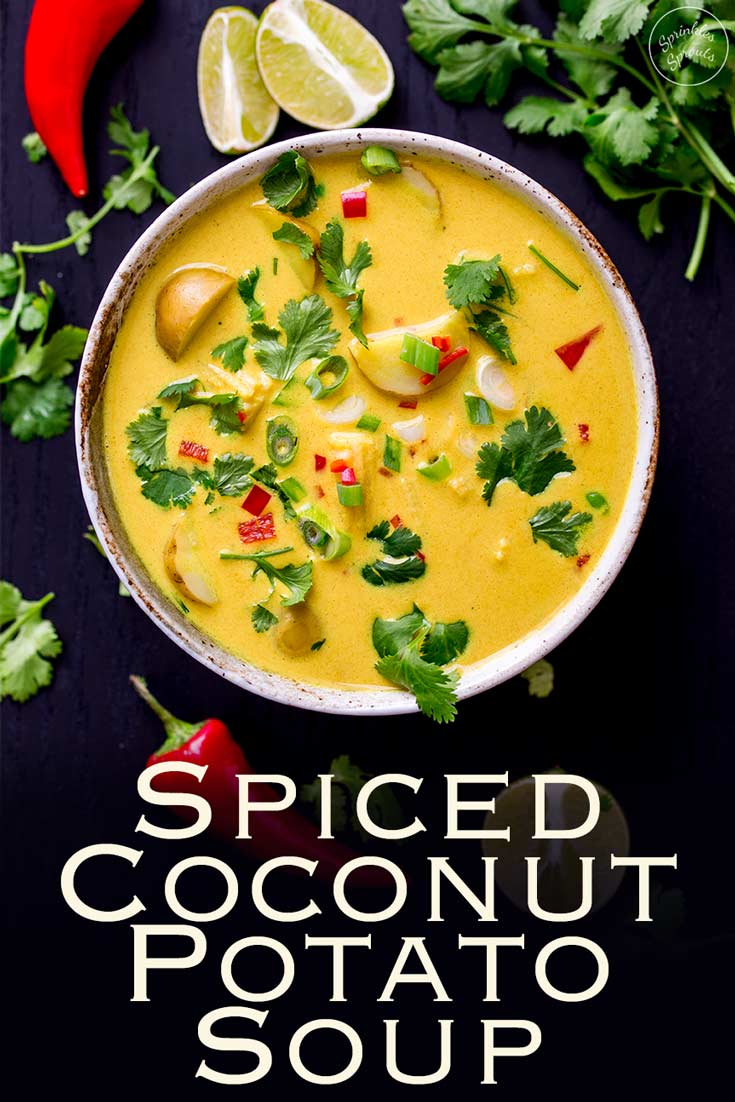 This spiced coconut potato soup is a comforting yet fresh vegan soup. It is the ideal dish for a warming casual supper with friends or for a light lunch with the girls. Packed with flavor this is quick to cook and tastes amazing.

You can easily adjust the spice levels and the cilantro is just a serving suggestion!

Just look at the colour of this gorgeous potato soup!!! It looks so inviting doesn't it. (Although maybe not if you are wearing white 😉 )

Is this coconut potato soup spicy?

Yes, but it is easy to tone down the spice if you need to.

The base for this soup is onion, garlic, ginger and chilli. They are softened and then used to boost a vegetable stock. Once the vegetables have been added and everything is almost tender. Coconut milk is added and then the final dish is garnished with extra red chilli, salad onions (green onion/spring onion) and lots of fresh cilantro.

If you want less spice, I would add less/no chili at the beginning and then you can add extra at the end if needed. The chilli flavour develops as the soup cooks, so like they say you can always add but you can't take away. (Unless it is a plate of cinnamon buns....I can always take away a cinnamon bun 😉 )

I hate Cilantro is there an alternative?

If cilantro tastes like soap to you, then obviously leave it out of this recipe. You can either garnish your soup with extra onion, some thai basil or a little bit of mint. Or just go for no garnish. This spicy coconut potato soup is so delicious you won't miss the cilantro.

Where can I buy baby sweetcorn from?

At some times of year you can buy it fresh in the fruit and veg section of the grocery store. However it is often hard to find. I have tested this soup with both fresh baby corn and canned baby corn. The only difference is when during the cooking process you add it to the soup. The canned baby sweetcorn is already cooked so it just need warming through, where as the raw variety will need to be cooked for longer. Both options are given in the recipe below.

I have found canned baby sweetcorn in all the major grocery stores. You need to look in the Asian foods section rather than the tinned veg section.

This can came from Safeways.

What to serve with this coconut potato soup?

For Dinner:
I would suggest serving some soft flat breads with this coconut potato soup. Either a naan bread, flat bread or soft flour tortilla would work well here.

For Lunch:
This coconut potato soup is quite filling, so for lunch I would just serve it on its own. Maybe with a fresh fruit platter for afterwards. Especially some tropical fruits like mango and pineapple. They will work well after the spice of the soup.

Here comes the waffly bit....Click HERE to jump straight to the recipe!!!!!!!

This recipe for coconut potato soup is a 'from my head' adaption of a recipe from the English supermarket chain Sainsburys. Like most supermarkets they produce a monthly magazine. I think it used to be a quid, which for a food mag isn't bad these days!

I used to collect them.....along with a lot of other food publications! I had a lot!!!! Seriously years upon years of back catalogue. I had some magazines dating back to my uni days!

When we moved to Australia I somehow managed to convince Stew that I needed to keep them all!! And that once day I would go through them, scan the recipes I loved and recycle the magazines......that day never came.

So of course they sat on a bookcase in my pantry. To be grabbed at when I needed inspiration. Or to read lovingly in the build up to Christmas (oh the Christmas issues were my favourite!!!)

Well until the fire! Then they were gone forever along with so many other things that we can never replace. Obviously in the grand scheme of what went up in flames my magazines are pretty much at the bottom of the list..... Believe me, I am not trying to compare some food magaziness to our kids baby photos. But the fact is the magazines were no more.

So I have delved deep and tried to remember the taste of this wonderful potato soup...it has taken a few attempts but I am happy that it tastes as good as I remember. Plus it really is my own now as I had no recipe to adapt.

I hope you love it too.

For more delicious soups why not try:

Pin this recipe for this Spiced Coconut Potato Soup for later. Pin it here 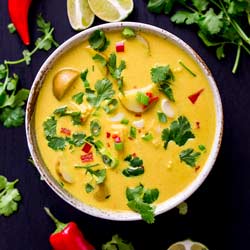 This spiced coconut and potato soup is a comforting yet fresh vegan soup. Ideal for a casual supper with friends or for a light lunch with the girls. Packed with flavor this is quick to cook and tastes amazing.
Prep Time5 mins
Cook Time25 mins
Total Time30 mins
Course: Soup
Cuisine: Asian Inspired
Servings: 6
Calories: 417kcal
Author: Claire | Sprinkle and Sprouts
For more great recipes follow me on PinterestFollow @sprinklessprout
Need Metric Measurements?Use the options below to toggle between cups and grams (if relevant)
Prevent your screen from going dark

If you are using canned sweetcorn, don't add them to the soup at stage 8. Cook the soup for a further 5 minutes and add the corn with the peas at stage 9.

If you love food why not subscribe to my newsletter, I will drop you an email every now and then, just to say hi and send you a couple of recipes think you might love, like this Spiced Coconut Potato Soup.

It isn't everyday! I am not that organised. Usually it is once a week (ish). And as a thank you I will send you my soup cookbook FREE. Full of my fav soups!