Fresh, simple and delicious, this homemade Marinara Sauce, tastes so much better than a store bought sauce. It is the basis for so many meals, use it on pasta, in your lasagne, as a topping for pizza and so much more!

When I was younger, so much younger than today I never needed anybodies help in any waaaaaaay.

Sorry couldn't resist!!! I can't help it, just writing those first few words reminded me of the Red Nose day song that Bananarama sang with Dawn French, Jennifer Saunders and Kathy Burke for Comic Relief. (I know the Beatles sang it first, but the comic relief version is the one I always think of 😉 )

Which now has me think of Johnny Deep in Vicar of Dibley and the Kylie Minogue in Men Behaving Badly, both of which were also Comic Relief spoofs.

None of which has anything to do with Marinara sauce!!!!!

Should I start again!!!

When I was younger, I worked in a hotel. It was a country hotel and really their big speciality was weddings. Some days we would have a wedding in the garden room, a wedding in the dining room and a wedding in the marquee. Those were the days when you knew you would be there until 3am!!!! But I am not complaining, I loved my time there and it paid for university!

One of the casual chefs was Lilianna, an Italian who made her own pasta and would come in for an evening if they needed pasta making. She was amazing!!! If you have never watched someone make orecchiette, it is amazing!! They cut off a small chunk of pasta dough, spread it with a knife and then turn it inside out to create the signature 'ear' shape. She did it so fast and so effortlessly! Amazing! I never mastered that skill. But I did get her fabulous marinara sauce recipe. Although actually she just called it her sauce recipe. No mention of marinara or even tomato, she said growing up they just called it sauce. 'Spaghetti and sauce', meant spaghetti and marinara sauce, but it was sauce. Everyone knew what 'sauce' meant.

I think Liliana's Nonna would still say I make it wrong as she originally used canned tomatoes that she had made herself from fresh tomatoes at the end of the summer months. I am afraid that I just use store bought ones 😳 Just make sure you don't buy the bargain basement tomatoes. Your sauce will be thin and you will be missing the richness. The key is a good brand, I am sure you have them in the pantry , I mean when a good quality brand of tinned tomatoes is on special you buy 20 so the pantry is always fully stocked. No? that just me? 😉

Either way, buy a decent brand and you will be rewarded! This sauce is leap years away from the jars of sauce you buy in the pasta aisle. This sauce tastes of tomatoes! It tastes fresh, delicious and so yummy that you want to dip hunks of bread straight into it. Go ahead I won't judge! Just don't hog all the bread!

Pin this recipe for Homemade Marinara Sauce. Pin it here. 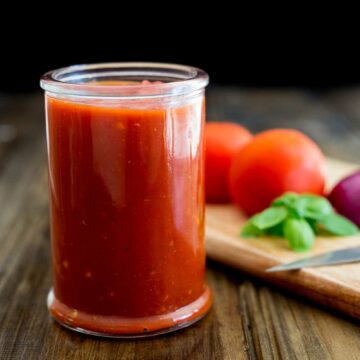 Fresh, simple and delicious, this homemade Marinara Sauce, tastes so much better than a store bought sauce. It is the basics for so many meals, use it on pasta, in your lasagne, as a topping for pizza and so much more!
Prep Time5 mins
Cook Time1 hr 30 mins
Total Time1 hr 35 mins
Servings: 6
Calories: 109kcal
Author: Claire | Sprinkle and Sprouts
For more great recipes follow me on PinterestFollow @sprinklessprout
Need Metric Measurements?Use the options below to toggle between cups and grams (if relevant)
Prevent your screen from going dark