This Easy Paella is the ultimate one pan dish. Rice, meat and fish are cooked together in a flavourful stock in this easy and delicious Spanish classic.

My inlaws arrive tomorrow, so to celebrate I thought I would share my paella recipe with you. I guess should explain that they live in a little municipality just south of Valencia! So it is sort of appropriate to share a dish that was created in the the city Valencia.

Paella has become synonymous with Spain, but the Spanish still class it as a regional dish, with very specific rules on how to cook it. I was taught to make paella by the sous chef at the hotel. He was as English as they come, but his family had a holiday home in Spain and he had a surrogate grandmother there who taught him the dish. Now like all regional dishes there are variations! Traditional Valencian paella has green beans, meat (chicken or rabbit) and often snails in it.

The seafood version that many mediterranean towns serve is the only other version that Valencians class as authentic. The mixed paella and vegetarian paella that are served across the globe is not classed as a true authentic paella. But they are still good!!! 😉

George told me all the rules for making a true paella. I ignore a couple of them....because, well because I don't really enjoy green beans in my paella and I know that without the chorizo sausage, my boys would be super disappointed! But I still use his method for creating a sofrito to start the dish and allowing the rice to gain a soccarrada at the end.

The sofrito is the mixture of vegetables that are cooked in oil at the beginning of the paella. They are the basis for the flavour and without them you end up with a saffron rice dish rather than a true paella.

The soccarrada is something special. It is created during the cooking process and is the best bit!! It is the slightly crunchy crispy skin of rice that forms at the bottom of your paella. Not burnt or overcooked, just crisp and delicious. Originally this was created naturally due to the tendency for cooking paella over an open flame. Now Spaniards recreate it using a high heat at the end of the cooking.

The first paella I ever had was cooked in a large dustbin lid on a beach in Argelès-sur-mer, which isn't in Spain at all!!!! Haha!!!! It was amazing!!!!! Everyone said the dustbin lid was the key. I didn't believe them at the time. But later whilst George was teaching me his dish, I learnt that the pan is so important. Traditionally paella pans are large flat pans, with a thin base. The idea is that the rice is cooking in a very thin layer, ensuring that the top and bottom are cooked at the same time. Because a paella isn't stirred you need everything to cook evenly.

Paella pans are pretty cheap and widely available in Spain and most of Europe. Here in Australia they are not so cheap!!!!! The one I use cost my $60!!!!! Where as the first paella pan I ever owned cost me 2 (about $3) from a Spanish market stall!!!

So, do you need a paella pan???? Ideally yes, but if you haven't got one it shouldn't put you off cooking a paella. Just use your biggest frying pan. If the rice won't fit in a thin layer in one pan, don't layer the rice up, instead use two frying pans. Honestly it is worth it!

Another thing that is stupidly expensive here in Australia is paella rice! I saw a bag of paella rice in coles for $12!!!!! What!!!! Sorry but I can't spend that much. So I experimented with medium grain rice and risotto rice. Medium grain was quite good, but the amount of stock seemed to vary depending on the brand! Not good for a recipe!!! Risotto rice gave more consistent results, and I found that arborio rice gave the best results. The more premium risotto rices, came out too sticky

The last thing I was told was to soak the saffron in the stock before you start and that you have to pronounce paella = pa-A-uh. Then you just dig in and enjoy!!

P.S Make sure everyone gets a bit of the soccarrada and any leftovers are delicious the following day!!!!

P.P.S Make it a fiesta and add some tapas style appetisers and a hug of sangria.

If you love this recipe for Easy Paella why not pin it for later.

I share a lot of food!!!! And quite a lot of other stuff! Come find me today x

Also find me on: 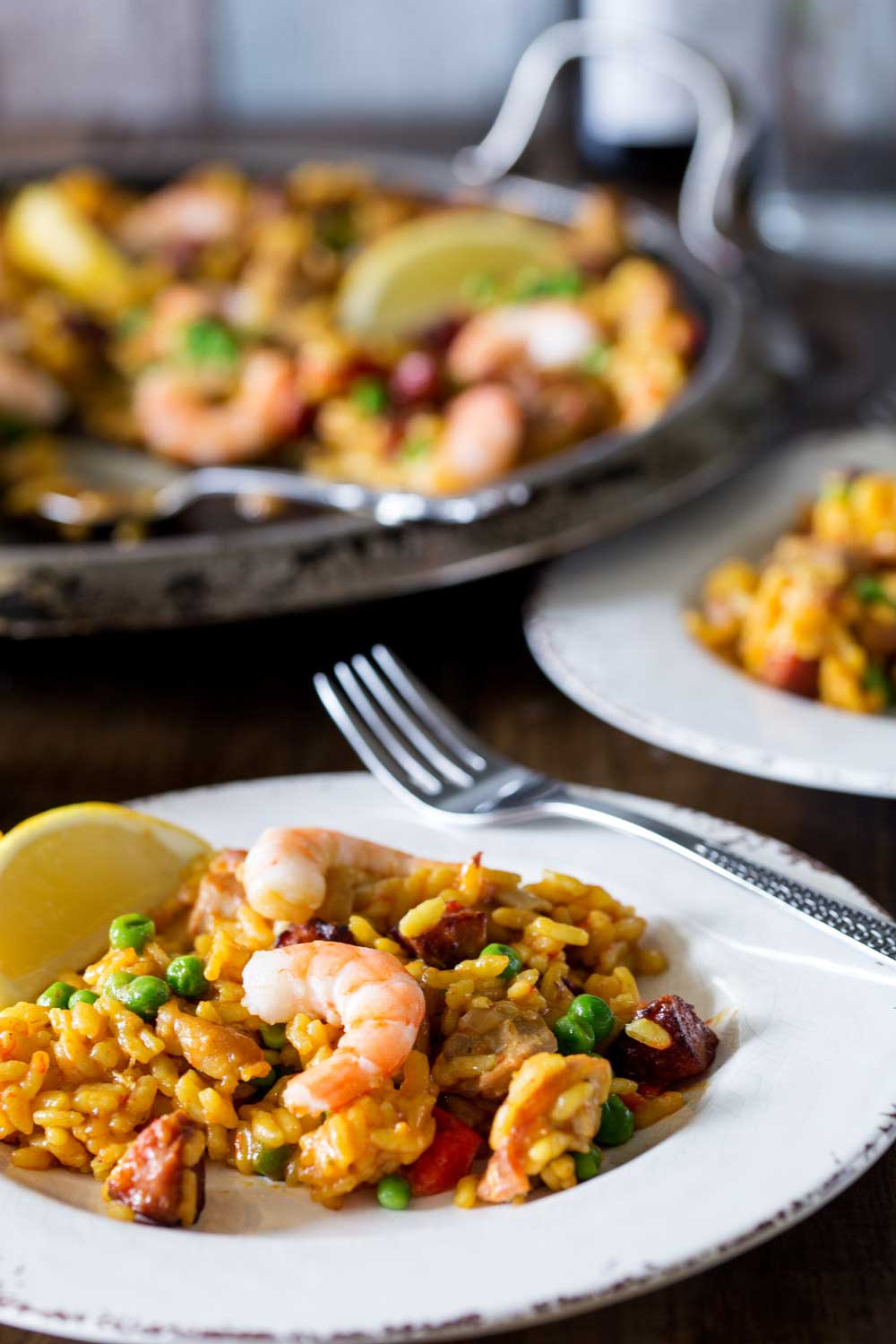 Paella is the ultimate one pan dish. Rice, meat and fish are cooked together in a flavourful stock in this easy and delicious Spanish classic.
Prep Time10 mins
Cook Time15 mins
Total Time25 mins
Course: Main
Cuisine: Spanish
Servings: 6
Calories: 638kcal
Author: Claire | Sprinkles and Sprouts
For more great recipes follow me on PinterestFollow @sprinklessprout
Need Metric Measurements?Use the options below to toggle between cups and grams (if relevant)
Prevent your screen from going dark

If you love food why not subscribe to my newsletter, I will drop you an email every now and then, just to say hi and send you a couple of recipes I think you might love. It isn't everyday! I am not that organised. Usually it is once a week (ish). And as a thank you I will send you my soup cookbook FREE. Full of my fav soups!