Butternut pumpkins were on a great special this week, which is why there are 3 in the fridge 😳 I just a love a good special, and I love butternut pumpkin.

Whilst I was a student, I spent the holidays working in a local hotel and restaurant. During the summer it had a fixed marquee...so there were plenty of weddings and summer balls. I worked a lot! I would work as a housekeeper during the day and a waitress in the evening. They were long shifts, by the end of the night... even in my flat black, standard issue, uniform shoes, my feet used to hurt. I can remember one Saturday night (well Sunday morning) I had worked 18 hours, I was exhausted! I crawled into bed just after 4:30am, I was so tired, my body was numb, but my feet....man they were throbbing. They hurt so much I couldn't sleep. It took me over an hour to fall asleep....But I got up again, ready to head back to waitress for a Sunday evening ball. I spent four summers (and three Christmases...one day we'll talk about the Christmas Day I ran out of petrol!!!!!) working at the hotel, I learnt a lot, made enough money to survive university and ate some wonderful food. Aside from getting to try every dish on the menu, we got our meals provided. It was sandwiches, soup, big bowls of pasta and cheese, occasionally there would be left over roasts or fried breakfasts, whatever it was you could be sure of two things, it would be delicious and it would be a leftovers affair. One of my favourites was the potato and bacon hash. It was cooked by Velma, who wasn't called Velma at all, her real name was Hanna, but apparently when she had first came to work in the kitchen, there was already a Hanna on the staff so Chef decided to give her a nickname. (He gave most people nicknames!) ......she had bobbed red hair and round glasses and so she had been named Velma (from Scooby Doo) writing it down it sounds rather insulting, but I honestly think she didn't mind. She introduced herself as Velma, I had worked there for a full summer and was back for Christmas before I found out her real name wasn't Velma!

That is all a bit of a side story really (I think most of my stories are 😉 )...cutting what is already a long story short. "Velma'' had an Austrian mother, so when it was her turn to cook employee lunch, we often got hash. She didn't call it hash, it was tirler gröstl, and it was what her mother would make her (and 6 brothers!!!!!) on a very regular basis, especially if they were struggling with something as her mothers theory was it could turn miserable into happy. I love that! Was it Nigella Lawson who said "Potatoes not Prozac"?

Whatever the reason for eating it, it was delicious. Leftover potatoes, fried with onions, ham, or more often bacon and sausage (left over from buffet breakfasts) fresh herbs and more black pepper than I had ever eaten on a dish in my life! Sometimes we got it with an egg but more often than not it would just be served as it was. Big frying pans of buttery delicious potatoey yummyness.

Oh I loved that potato hash.....I still do and it is a regular dinner in our house...my boys wolf it down. You can't go wrong with potatoes and bacon but this pumpkin and sweet potato version is a delicious lower-carb, vegetarian alternative. Not that I ever run down the low-carbs path, but after a bit of over indulgence, reining it in for a few days helps my, not so skinny jeans do up! As I am still feeling guilty about the whole brie I ate on Saturday night (slight exaggeration...but only a slight one!) and I have a small glut of butternut pumpkins....I thought this was just the meal.

I love this with a poached egg (or fried) but without the egg it is a great vegan meal and for the die-hard carnivores it is a great side dish to accompany a grilled steak. 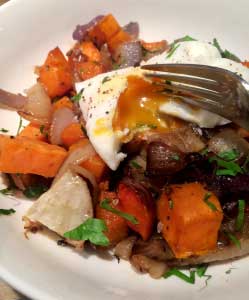 Butternut Pumpkin and Sweet Potato Hash. A paleo friendly, vegetarian dinner that can easily be tweaked to accommodate vegans.
Prep Time10 mins
Cook Time35 mins
Total Time45 mins
Servings: 2 as a main dish (or 4 as a side)
Author: Claire | Sprinkles and Sprouts
For more great recipes follow me on PinterestFollow @sprinklessprout
Need Metric Measurements?Use the options below to toggle between cups and grams (if relevant)
Prevent your screen from going dark