Did I mention that Stew and I had a week away? Once or twice? 😳 As you probably know we spent the week being tourists in our own country. We went over to Canberra and visited Government House before driving back to Sydney where I finally got to see the Opera House and the Sydney Harbour Bridge. And we ate fabulous food. I was pretty silent on the food in my last holiday post but today I am sharing it in great detail. Because Oh My Goodness. YUM!

Now I am not a restaurant critic, I am just someone who loves food and loves eating. I don't think I could ever be a restaurant critic, as I don't like saying negative things. I was brought up with the adage if you can't say anything nice then don't say anything at all. Although I can assure you that there isn't a single negative thing I could say about my meal at Lucio's. Apart from the fact it was raining when we left....what sort of a restaurant doesn't stop the rain for you??? 😉  See I told you, nothing negative to say. 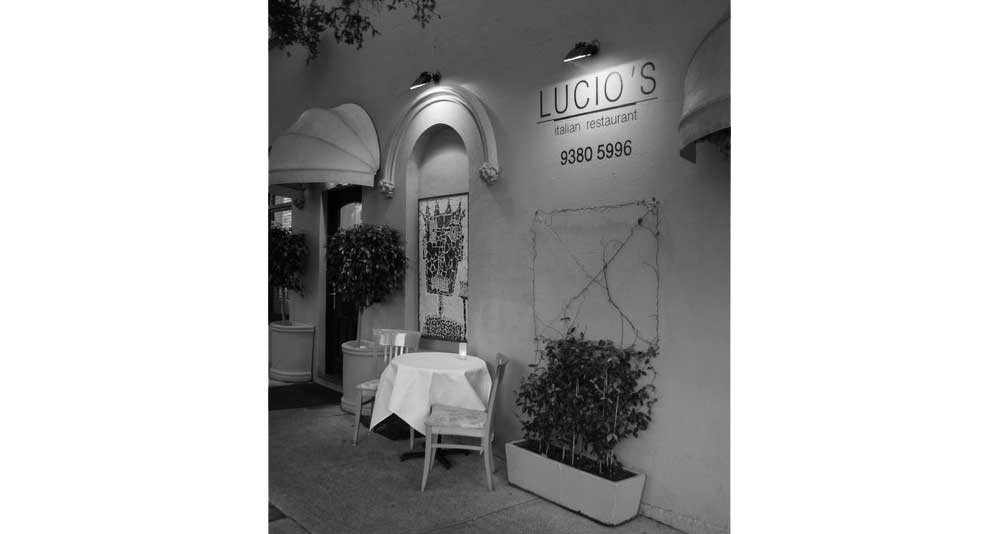 Before I go on I want to say, this post may become a bit gushing! I really did love my meal, I have a thesaurus open as I don't think my usual flow of lovely and delicious is going to cut it here! So picture the scene. Thursday evening in an unknown city and we take a taxi ride out to Paddington and Winsor Street, which is a beautiful leafy terraced road. On the corner is a little piece of Italy. A smallish quite unassuming street frontage with some amazing smells wafting out. I was instantly happy as they had fairy lights in the tree. I love fairy lights!

Inside the walls are covered in artwork, a diverse mix representing local and world famous artists. Stew and I had differing options on which we would put on our walls. This is probably why, before Rickety Cottage was destroyed, the only things we had on the walls were brightly coloured paintings by some young, adorable and highly talented resident artists 😉 and the most amazing family shoe portrait by the talented Vicki Palmer. No matter what your taste in art I am sure there will be something for you at Lucio's. Even the menus were artistically decorated.

After being seated by a wonderfully friendly and attentive waiter we enjoyed a pre dinner drink. Gin and tonic for Stew, with a great choice of gins, and I had a fresh white peach bellini, which was packed full of peach flavour without being too sweet. Once drinks were sorted we ordered pretty quickly (unusual for me!!!) but we had already decided that we wanted the taster menu. The taster menu in an Italian restaurant....as you can guess, it was chocked full of my favourite foods. There were a few items on there that Stew was unsure about but I was too giddy with excitement to notice his slightly worried expression at the mention of clams and fennel! More on that later! And don't worry, no Stews were harmed in the duration of our meal.

We were served with an amuse-bouche of cauliflower soup, it was perfectly smooth. Soft, velvety and light with a fresh cauliflower taste. Served warm with a drizzle of grassy olive oil it was a perfect way to start the meal. This was followed by the 'Burrata e Zucca' A crisp bruschetta topped with a slice of roasted pumpkin, soft burrata and crisp prosciutto. All lightly dressed with a pumpkin seed dressing. The pumpkin was cooked perfectly, it retained it shape but was meltingly soft, the perfect match for the crisp bruschetta. 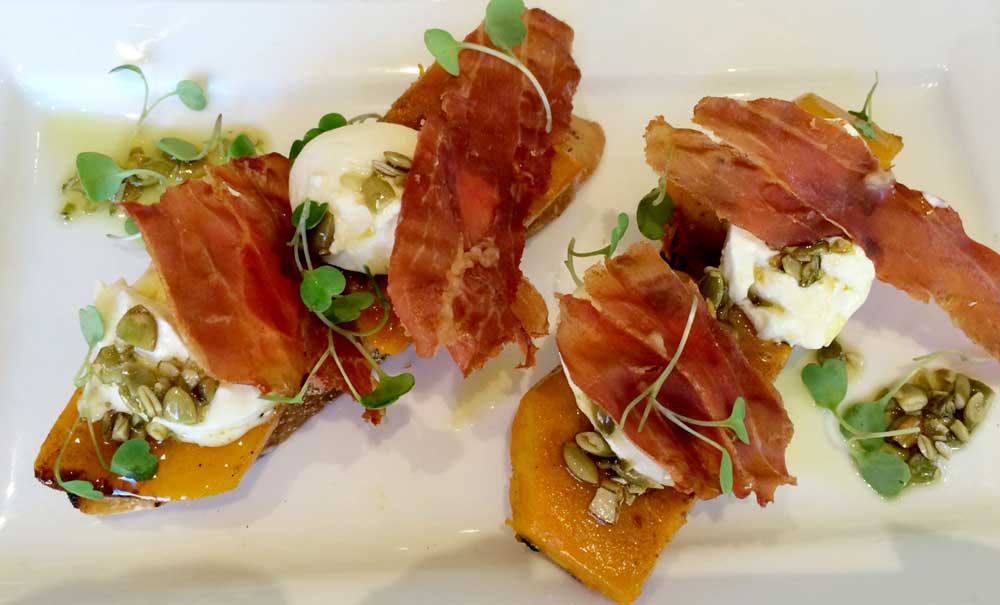 And now for the first of the courses that had Stew worried, 'Crudo di Pesce'. A carpaccio of kingfish, raw fish isn't his favourite so he was a little unsure. But when it arrived it looked sensational. Fresh, light and delicious. And it didn't disappoint. The fish was topped with shaved fennel and a creamed avocado. The crisp bite of the fennel cut through the soft fish and the addition of fresh chives made the dish. I admit I was surprised, but the chives took the dish from amazing to sublime. Such a simple addition but the mild onion hit was perfect. Stew was even more surprised as not only did he eat his raw fish, he loved it! "Who knew I loved raw fish AND fennel". 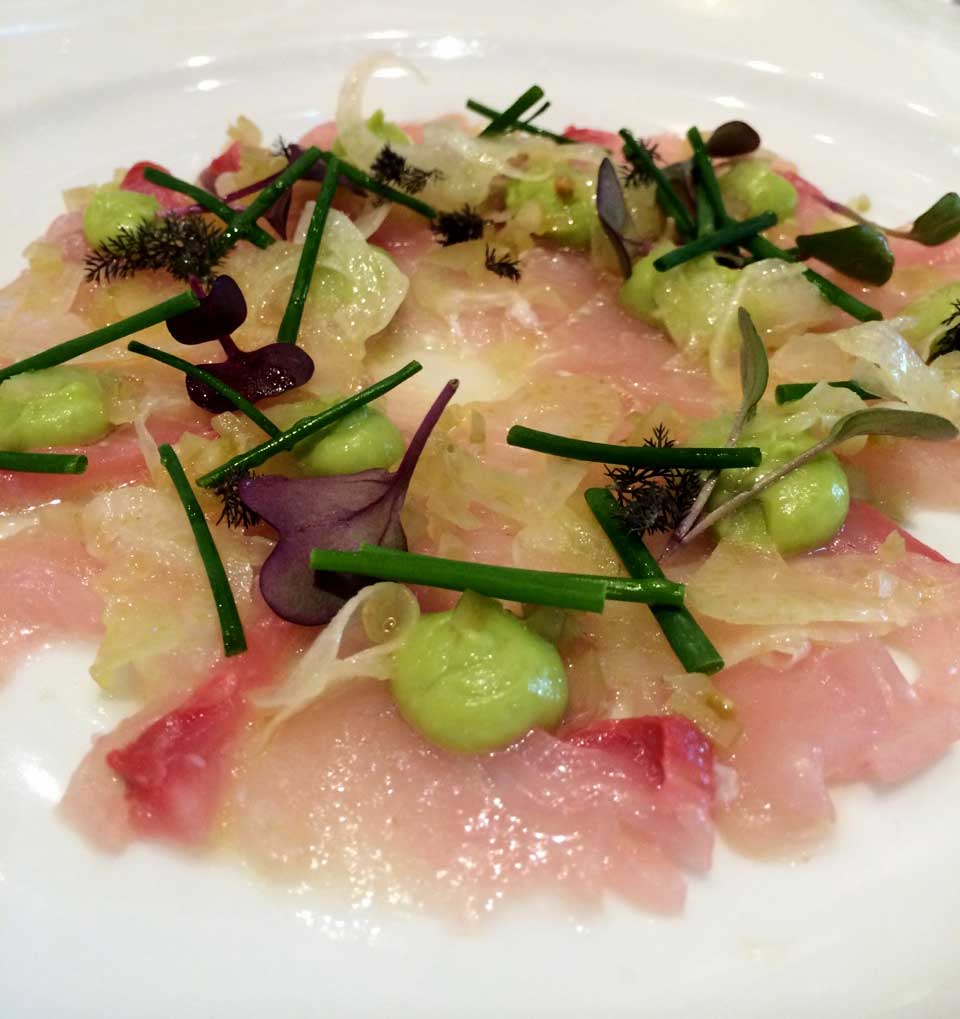 What followed was the most amazing pasta dish ever. I know I said that a few weeks ago when I had the linguine with prawns and zucchini, but that wonderful dish has been pipped by another amazing seafood pasta. 'Fazzoletti Neri ai Frutti di Mare'. The description of black handkerchief pasta with cuttlefish, mussels, prawns & chilli, does not do it justice! The squid ink pasta was cooked to perfection and tossed with a buttery mix of garlic seafood and enough chilli for you to know it was there, but not so much that it overpowered the dish. Each piece of seafood was cooked beautifully and the 'sauce' was light and barely there. Just enough to coat the pasta and leave you wanting to lick out the bowl. I definitely heard the words "I am loving seafood pasta" come from Stew's side of the table. 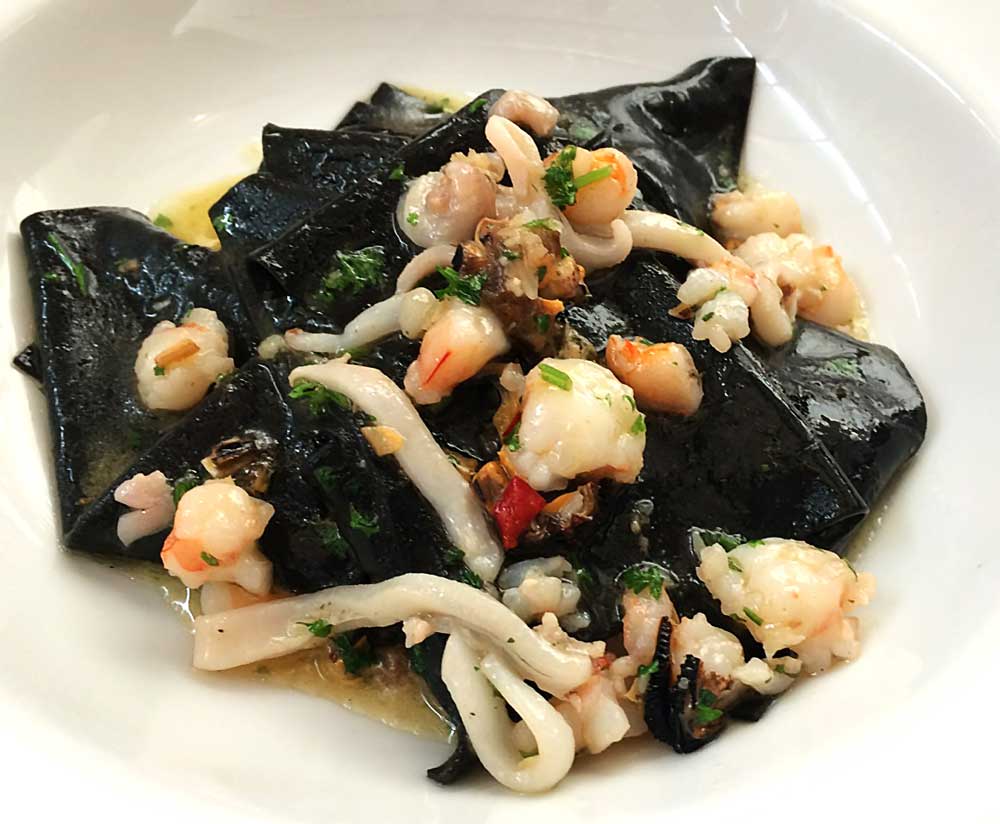 From here we move to fish of the day, a blue eye trevalla fillet with vongole with braised Italian vegetables. Crisp skin, firm moist fish, sweet clams and a rich sauce packed full of tomatoes, onion and zucchini. As he ate it Stew mentioned "first raw fish, then fennel, seafood pasta and now clams. I guess this is why you have the taster menu. You discover foods you refused to eat before" I think I just nodded as I was too busy eating!

At this point I did wonder if I was going to be able to face much more food, but when the 'Cosoletta d'agnello' arrived I changed my mind. Perfect medium-rare lamb, with a pine nut crust, served with a smoky eggplant puree, some tangy sheep milk yoghurt, roasted cherry tomatoes and some crisp slivers of eggplant. Individually the elements were delicious, but as a whole they sung. The smoky eggplant brought out the sweetness of the nuts in the crust, the tangy yoghurt cut through the sweetness of the tomatoes and at the same time enhanced the sweetness of the lamb. There was silence during this course other than a vague murmur of 'eggplant...who knew'. Just scrumptious. 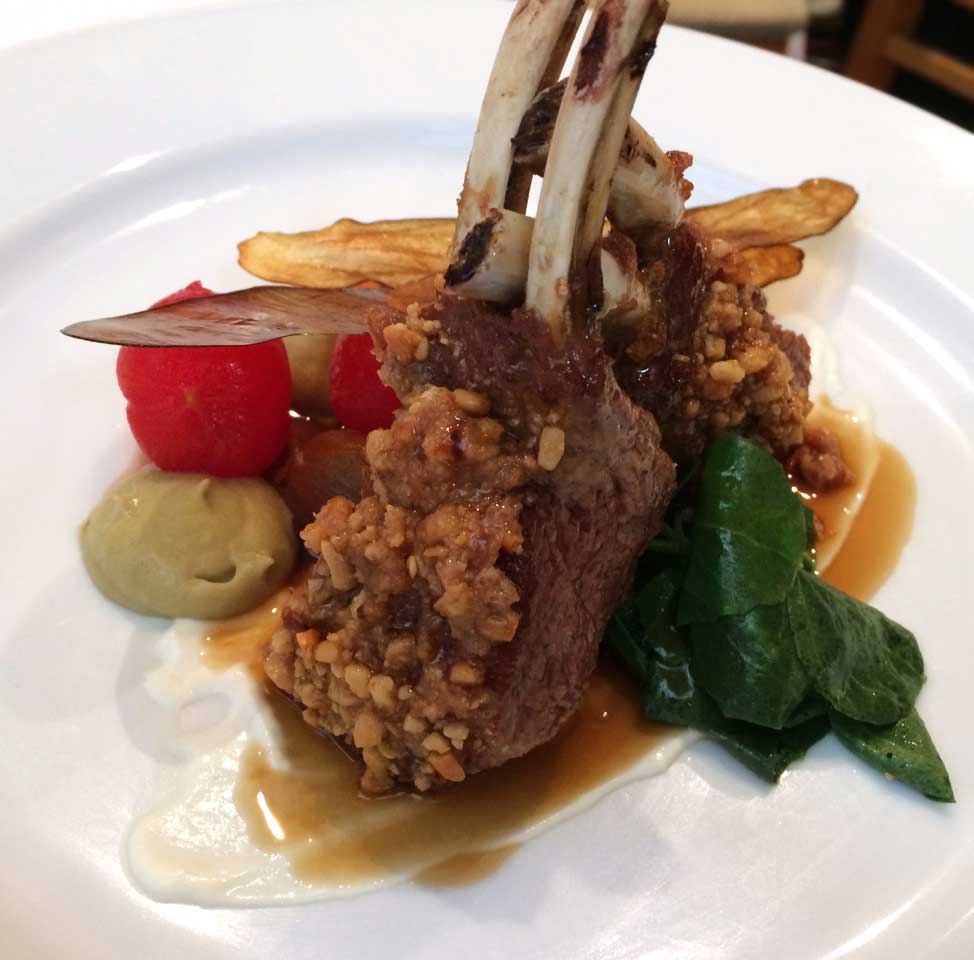 And now for pudding. This was the course that I was least excited about and the course Stew has been waiting for since he first saw the words 'salted caramel'. I should add I am not a big pudding eater. I tend to order a cheese platter rather than dessert so pudding is always the course that I find hardest. But this pudding blew me away! Banana gelato with crumbled malt cake, a sweet nutty macadamia meringue, chunks of caramelised banana and salted caramel. Sweet, salty, crispy, soft, it was a taste explosion. The meringue was wafer thin so it melted into your mouth. The banana gelato was creamy, rich and the perfect level of sweetness and the salted caramel was heavy enough on the salt to give you the perfect balance but without over powering the essence of a sweet pudding. I couldn't finish it, but only because I had demolished the previous 6 courses! 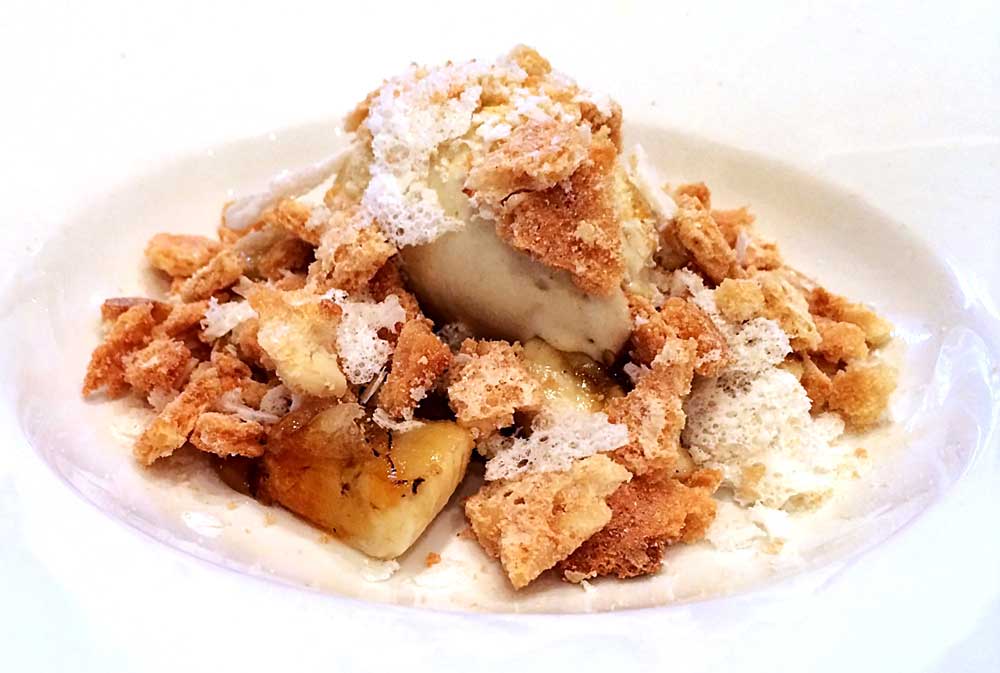 We finished the meal with coffee, which was typical Italian coffee, very strong and very hot. Perfect!

Due to the nature of the ambiently (yes I have made that word up!) lit restaurant and my phone camera, many of my photos were poor quality, which I was so very disappointed about. I wanted to share the most wonderful food with you. Luckily the wonderful Sally from Lucio's sent me over some of their stock photos. Every photo she sent was identical to the meal we ate. So not only can I now share with you the beautiful and scrumptious food but I can safely say that the food we experienced is the standard and I can assure you that is an excellent standard!

Do you think I have used the word perfect enough yet? I cannot recommend Lucio's highly enough. We searched out a very special place to celebrate our first time away in 5 years and it didn't disappoint. The bill was not small, but every single cent was money well spent! I would go back in a heartbeat, it was a little piece of Italy in the most beautiful of Sydney settings.