Blue cheese, pear and walnuts.....I was tempted to just write that and be done with it. Such a combination doesn't need much more of an introduction. But that wouldn't give you much to read and it wouldn't give me time to  natter about food, and that is something I love to do. 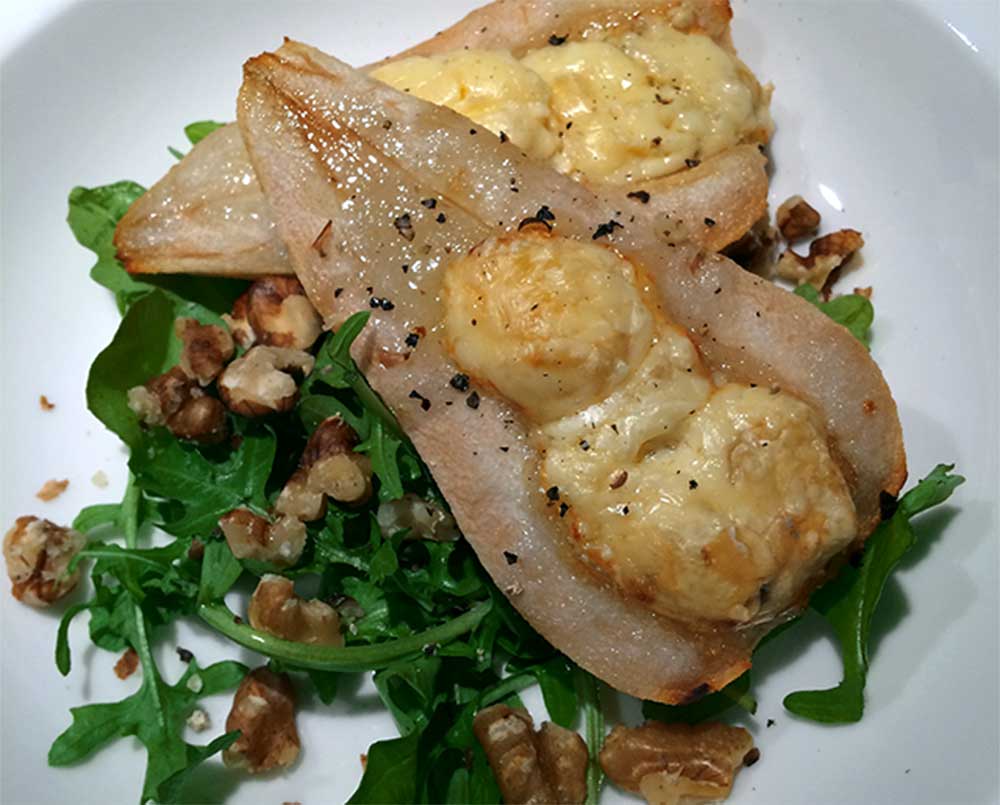 I didn't always love blue cheese, it has grown on me slowly. At first it was the mild creamy taste of a blue cheese mousse, moving onto the creamy taste of a Gorgonzola, and finally the piquant tang of some Roquefort. Not forgetting my roots and the amazing Stilton. All so yummy, perfect on crackers, toast, gorgeous melted, perfect in a sandwich....just about anywhere you can put cheese you can find a blue cheese that will work.

Blue cheese divides people...it divides cheese eaters...some love it...some hate it... I love it and I work on making everyone else love it too 😉

I can remember blue cheese always being presented during meals in France, the cheese course in France comes before the pudding, rather than at the end of the meal, but neither of my parents ate it so I never tried it. It was stinky mouldy cheese!!! Why (thinking as an 8-14 year old) would I want to eat mould!!! And that is a fair question and one that now is answered with a simple "because it is delicious". But fundamentally that is the issue with blue cheese....it looks odd, it looks like something you shouldn't eat. But as with lots of things in life...just because you shouldn't it doesn't mean you don't.

So it was there in my life...but it wasn't until  I accidentally ordered it in a little bistro in Nottingham, that I actually realised I had been missing out. I say accidentally but really it was more of a rash decision based on a thought process that went something like this,"I have to order and I have to order now and I really don't want the pâté" (my love and loathing of pâté is another post entirely 😉 ) So I ordered a poached pear filled with a blue cheese mousse served with a port reduction. Today that just sounds like food heaven and I am wondering whether I need to adapt this recipe to add a port reduction!! But at the time I was under pressure and I panic ordered, man I am glad I did. It was amazing. Firm yet soft (you can have both...think fridge cold butter) pear, melt in the mouth blue cheese mousse and a sticky rich sauce. There was definite food envy from across the table...but I wasn't sharing! No, I don't want to taste the pâté...that is how I ended up in this amazing situation where I have the divine blue cheese.

It started with a mousse and ended with chunks straight from the fridge when no one is looking...No seriously I never do that....NEVER! 😳

Pear and blue cheese....the little bistro in Nottingham knew it was a winning combination and I am certain you will find this a winner too. Served individually this is a great starter but serve two halves with some bread and you have a great lunch or supper. Watch this space for an update....I really want to try this with a port dressing 🙂

Serves 2 as a supper or 4 as a starter